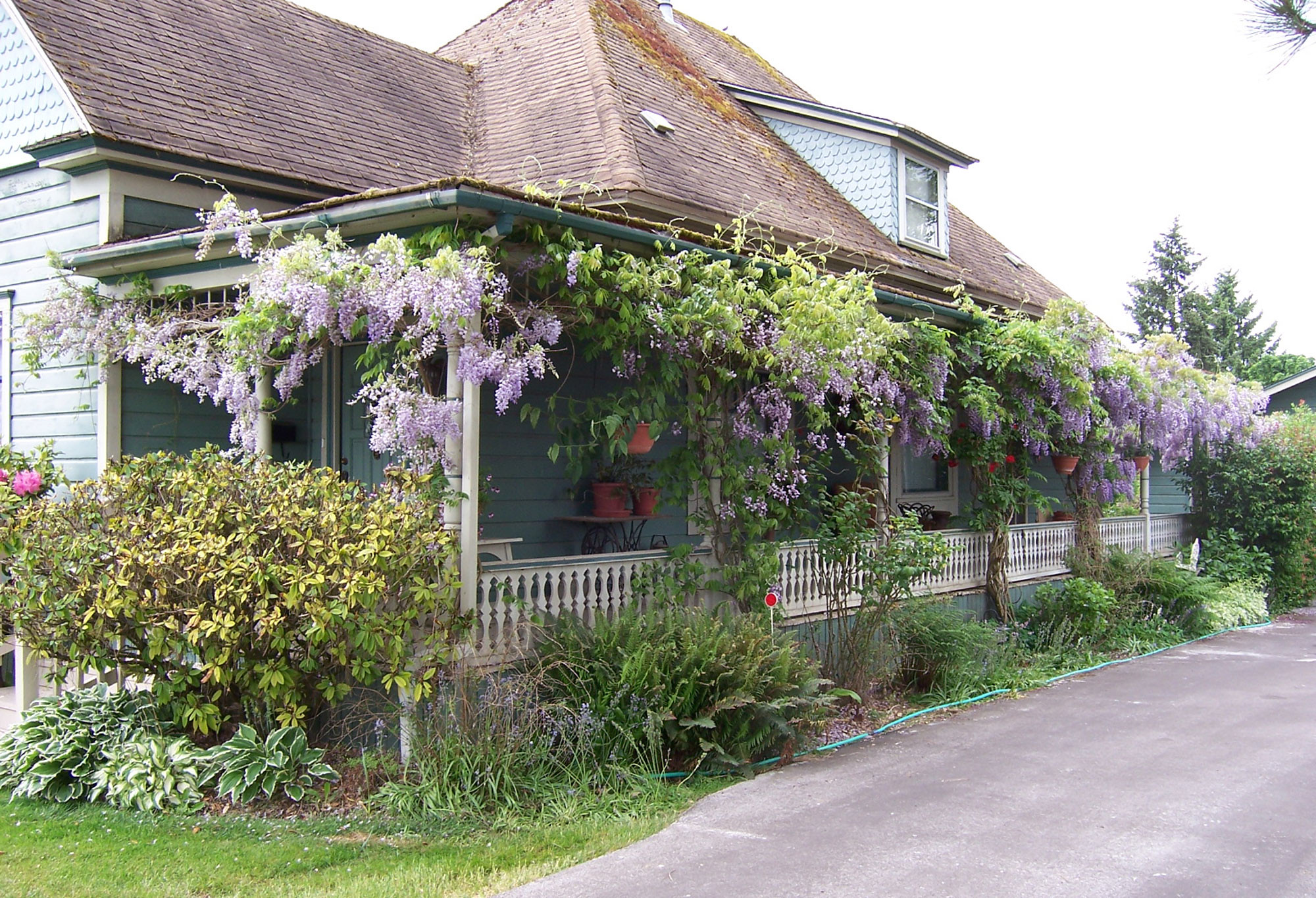 Kym PokornyJanuary 11, 2021January 14, 2021No Comments on Wisteria care: Take out clippers twice a year and go to town

Wisteria delivers a beautiful spring display, but this vigorous vine needs plenty of pruning to keep it from swallowing the garden.

“Wisteria are very vigorous vines and can climb easily to 30 to 40 feet,” said Neil Bell, a horticulturist with Oregon State University Extension Service. “They can be quite heavy and should be grown on a strong structure.”

When people see the jaw-dropping blooms erupt in mid-spring, they covet wisteria for their own garden. But, they should first know that in addition to the proper support, the vine needs vigorous pruning.

“Before planting one, people should realize the effort involved in keeping them in bounds,” Bell noted. “You can tackle most flowering shrubs once a year, but wisteria is so insanely vigorous there’s an advantage to summer pruning as well as in winter. The most common mistake is not pruning at all.”

Most frequently grown are the Chinese species (Wisteria sinensis), which blooms on bare branches before foliage emerges with flowers that open all at once. They’re smaller than the blooms of Japanese wisteria (W. floribunda), which open gradually from the top down and after leaves come out. Fragrant flowers range in color from blue to lavender and more rarely white. Both species put out loads of runners that can be pruned more than twice a year if the plant is threatening to take over a structure — especially your house.

Because the foliage is gone and the runners are easier to see, winter is the easiest time to prune, Bell said. Take a look at the vine and cut excess growth to the trunk and then prune the rest of the runners to two or three buds or about 6 inches long. Cut just above the chosen bud. Again in summer, you’ll want to prune excess growth and clip the remainder to two to three buds.

Another option is to train your wisteria into a tree, which allows it to be grown away from structures where it can cause major damage if left unpruned. It also makes it easier to get around the plant when it’s time for clipping, Bell said.

To create a tree, use a robust metal post to hold the vine. Start by training a single shoot up the support, which could take one growing season, he said. The following year, cut the main stem above the top of your support where you want “branches” to grow and the basic form of the tree is complete. Each year after this, the wisteria will require hard pruning to remain manageable. The shoots can be cut back significantly and still bear flowers.

Sometimes people complain that their wisteria is not blooming. Be aware, Bell said, that flowers often don’t appear for two or three years (sometimes longer) after planting unless you bought one while it was blooming. If you’ve waited what seems like too long, however, there are some things you can do to nudge it along. Stressing the plant by not fertilizing and root pruning will often force it into bloom. To root prune, use a shovel to cut the roots in a circle about 1 to 2 feet from the plant’s trunk.

Bell’s other tips for growing wisteria include planting in full sun in well-drained soil that’s kept consistently moist but not wet. Fertilize with a low-nitrogen (first number in the three-number sequence on the label) product. Less fertilizer is better than over fertilizing. Only feed once a year, every other year or not at all.

A fun fact: The world’s largest known wisteria is in Sierra Madre, California, measuring more than 1 acre and weighing 250 tons. The Chinese species was planted in 1894.

Keep in mind that the seeds and fuzzy seed pods of wisteria are toxic.