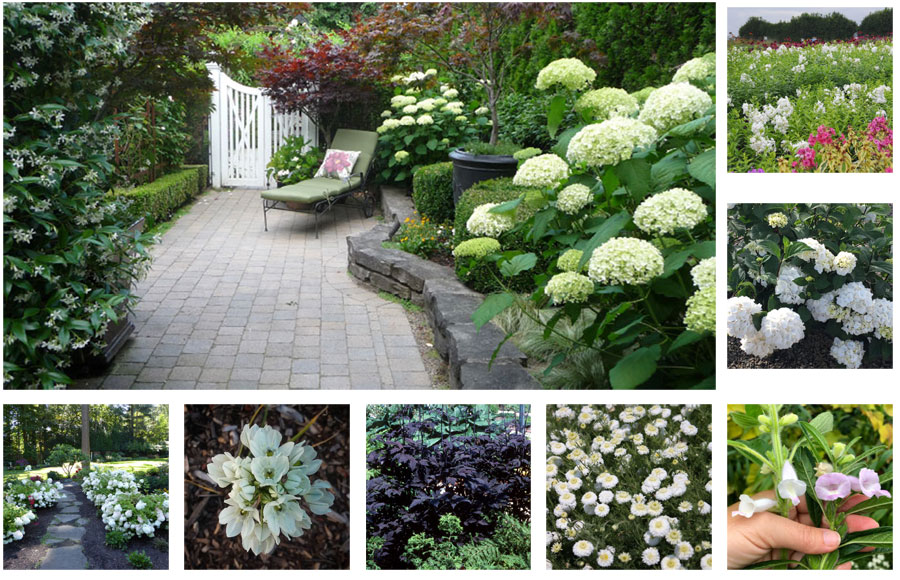 These white-blooming plants can brighten up landscapes — Part one of two
Scroll to the bottom of the page for slideshow.

Blooms come in all variations of color and hue, but there is a special place for white blooms in a garden or landscape.

White blooms can also be important as architectural elements and for drawing attention to sunlight in both lighted and shady areas.

“I like to use white blooms for specific contrast or capturing backlight,” said Roxy Olsson, a landscape designer at retailer Farmington Gardens in Beaverton, Oregon. Planted in front of a window, looking from inside to outside, they can capture light in the evening glow, and for darker spaces in the garden, white blooms promote interest.

Many white blooming plants also offer fragrance and food for insects and birds and can extend seasonal interest, often as the first flowers in late winter and early spring. While white in the garden is sometimes overlooked, Hancock said, designers and growers agreed it has a multifunction that is inescapable, including a calming, healing effect.

Given the broad range of white-blooming plants, from annuals to vines and even trees, in this Part 1 of a two-part article, we focus here on nearly half of the top-quality plants growers and designers named as strong selections — and why.

Perennials, groundcovers
As the foundation of any garden, white blooming perennials offer long-term consistency and bloom.
Eschscholzia californica ‘Alba’ (white California poppy) has two growth spurts, reseeds itself, is appreciated by native bees, pairs well with blue fescue and is extremely drought tolerant, according to Olsson.

For its architectural height and structure —highlighting the middle and back of the garden bed — she uses the 1–2 foot dwarf Lupinus ‘Gallery White’ (lupine). It mixes well with other flowers like poppies, and bees, butterflies, and hummingbirds love it.

Taking a little more sun, the 2–2 ½ feet Physostegia virginiana ‘Miss Manners’ (obedient plant) will grow summer to early fall in moist soil and works as a good cut flower. “It is adaptable, but not drought-tolerant,” Olsson said. “It likes periodic wetness.”

Leucanthemum ‘Shortstop’ (Shortstop™ Shasta daisy) hits the nostalgia trend, according to Hancock. It’s easy to grow, resistant to some fungi, and has a long bloom time for a daisy. It is a smaller 1–2 foot size for container or garden growing, and attracts pollinators.

Hancock also believes the evergreen, 1–2 feet Agapanthus ‘Double Diamond’ does not get the attention it deserves, partly because the genus is synonymous with lavender blue. “But it is fun, with double flowers, a little showier, a little more compact, good for urban spaces and a longer bloom, so more bloom for enjoyment.”

A more recent addition to her white blooming repertoire, Fuchsia magellanica ‘Hawkshead’ is perfect for part-shade situations that need easy care, said Kip Nordstrom, garden designer and owner of Hearth n’ Soul in Lake Oswego, Oregon. She called it an “outstanding” evergreen performer with consistent blooms from summer through late fall on a hardy, fast-growing 4 foot by 4 foot plant that needs consistent moisture.

Another tried-and-true plant is Hosta plantaginea ‘Venus’, according to Nordstrom. With “gorgeous” and fragrant double-flowers on a compact 20-inch by 35-inch plant, it is good for covering shady ground.

Sometimes Nordstrom wants to tidy the 3–7 foot Veronicastrum virginicum (Culver’s root), but she doesn’t dare because the bees (and other pollinators) love it. “It only blooms once in the summer, but they last at least a month,” she said.

Gardeners much watch Anemone × hybrida ‘Honorine Jobert’ carefully because it will naturalize and spread, but the “stunning” 2–5 foot tall plant that blooms in late July and lasts into October. It is Nordstrom’s favorite white-flowering plant. “It always has something happening for months on end,” she said.

Although she uses a lot of white pansies for customers who want a winter container garden, she turns to Helleborus niger ‘HGC Jacob’ (Christmas rose) for its months-long blooms from November through February. She later transfers it into the summer garden for permanent planting. That, or Helleborus niger ‘HGC Josef Lemper’, which is interchangeable because both cultivars perform strongly.

Kirk is also a fan of ‘Jacob’ for its longevity and because the flower heads face up. “You do need to be mindful of exposure; too hot will burn it; too moist, it will fail,” she said.

For trouble-free flowers, Grace Dinsdale, owner of wholesale grower Blooming Nursery and retailer Blooming Junction, both based in Cornelius, Oregon, points to Gaura ‘So White’ (Wand Flower), one of her bestsellers. “This one is 18 inches, a good medium height,” she said. She likes it better than the more recently released shorter versions. “It provides more utility in combination pots and in the front of the border.”

Also in the border, Phlox paniculata ‘David’ is a standout 3-foot-tall variety with a rounded dome of florets. Dinsdale recommends it for moist areas, and considers it one of the cleanest phlox she’s found. “It has a wonderfully billowy element that looks good with everything, even if next to something spiky.” It’s fragrant, needs limited deadheading, blooms July through September and is a good cut flower.

Another fragrant flower, Cimicifuga ‘Hillside Black Beauty’ (Bugbane), loves moisture and has tall, white, narrow 4–5 foot flowers and feathery, dark-colored foliage. Mostly people include it for the foliage because there’s not a huge display, according to Dinsdale. “But, it is good for cut flowers, deer resistant, attracts birds and bees, and blooms summer into fall.”

Dropping back to the ground, Chamaemelum nobile ‘Flore Pleno’ (double-flowered Roman chamomile) bears one-inch wide bold flowers with finer foliage than the annual Matricaria chamomilla used for making tea. “Planted as a lawn, it needs to be mown before it’s in full bloom,” Dinsdale said. Maintenance keeps it from becoming rangy, but it is easy to care for in hot, dry and sunny locations.

At 18-inches in a shady area, Beesia deltophylla (false bugbane) has evergreen leaves, and small stacks of white blooms like Heuchera, according to Kirk. But, the leaves stay on longer. In a medium-wet area, she might pair it with Astilbe and Sarcococca spp. (sweet box), variegated Hosta and fern or Fragraria for a woodland feel.

“The sweetness of Sarcococca, which is blooming right now, is that you step outside and you ask, ‘What is that phenomenal smell?” Kirk said.

Bulbs
Leucojum aestivum (summer snowflake) actually flowers in late spring, naturalizes beautifully, and is one of Kirk’s favorites — white with a touch of green, providing more than one look.

And Galanthus nivalis (snow drops), at 5–7 inches, appears in just about every one of her designs because the white in the flowers is particularly reflective, beautiful and bright.

Triteleia hyacinthina (white brodiaea) is a lily reminiscent of agapanthus in flower shape but on a smaller scale. “It fantastic when planted in clusters,” Olsson said. When it bends back and forth, it gives a sense of movement and character. The bulb is also a food crop of First Nations people of the Willamette Valley.

Vines
Schizophragma elliptifolium ‘MonHart’ (Lacy Hearts™ hydrangea vine), with its gray-green heart-shaped leaves with white edges, answers the trend toward variegated foliage. It bears white lacecap flowers in the summer, according to Hancock. For adding privacy or covering an old wall, it’s a beautiful backdrop all summer long, and also tolerates some shade.

Holboellia brachyandra ‘HWJ1023’ (Heavenly Ascent® Holboellia) has rich green evergreen foliage and deeply fragrant, waxy white flowers that, when pollinated, produce ornamental fruit. It is not self-clinging and needs support for its up-to-20-foot size. “It’s on the bigger size, but won’t get like wisteria,” Handcock said.

As far as Kirk is concerned, nothing beats Clematis armandii (Evergreen clematis) — its fragrance, its showiness and masses of star-shaped flowers.

Edibles
“Every human being should grow sesame once,” said Brie Arthur, garden designer, horticulturist and author from Raleigh-Durham, North Carolina. “It’s like a white foxglove that blooms all summer.” It’s a robust plant, pollinator friendly, and “would be a fantastic plant for garden centers to grow and sell a small amount.”

Lagenaria siceraria (cucuzzi squash) is one of Arthur’s favorite squash plants to grow for not only the fruit but also the white flowers that open at night. Trichosanthes cucumerina (snake gourd) also has giant white flowers, and works as a screen or architectural element when attached to an arbor or fence.

Eruca vesicaria ssp. sativa (arugula) is practical to grow because it is edible, according to Arthur. A spicy deterrent for browsing mammals, the flowers are beautiful when they bolt in spring, providing nectar for pollinators at a time when it is scarce.

Hydrangea
On any list of white blooming plants, rising to the top is hydrangea, of which there are dozens of varieties. Arthur is partial to the hardy Hydrangea paniculata ‘Bokrathirteen’ SWEET SUMMER, a smaller variety at 6 ½ feet, bursting with large, green blooms that mature into white with strong stems that are good for cuttings. She uses it to stud her Christmas tree with flowers. Culling the stems for this use is a great excuse to trim the shrub, she said.

Arthur also mentions the reliable bloomer (even in cold climates) Hydrangea arborescens ‘Annabelle’ (smooth hydrangea), which is adaptable nationwide. It is a rounded and somewhat compact 3–5 feet, with blooms in early summer and sometimes again in fall.

Nordstrom said ‘Annabelle’ is particularly good for those sun-shade locations in the garden, because a half-day of sun is the cure for it flopping over. She uses ‘Annabelle’ for its compactness as well as the newer varieties ‘Bombshell’ and ‘Bobo’. “Everyone doesn’t have room to put big hydrangeas in,” Nordstrom said. The smaller ones work nicely even placed on both sides of a pathway.

Hancock said Monrovia’s Candy Apple™ Hydrangea, at 4 –4 ½ feet, is a much smaller version of ‘Limelight’. It fits into smaller gardens, blooms on newer wood, requires no pruning like H. macrophylla, offers season-long interest and is a good cut flower.

The drama of contrasting colors is on display with H. macrophylla ‘Zebra’, a mophead variety that is 3–4 feet high and wide, with sparkling white blooms on black stems. “The juxtaposition of the black and white makes it a knockout,” Dinsdale said. She calls it “lustrous” at the nursery.

Another compact grower, H. quercifolia ‘Pee Wee’, is multifunctional, according to Kirk. “It attracts wildlife and has blooms that I can use in my home dried or not, and I can leave it for cover for the bushtits, while enjoying that sort of russet color that the flowers turn,” she said. “When that jade leaf starts to turn in fall, stand back for orange, red and burgundy colors.”

Given the great number of white blooming plants, no one article can include them all. Check back for our next installment of Visions of White, when we continue to review the top performers, and trend-setters, and focus exclusively in Part 2 on woody plants.