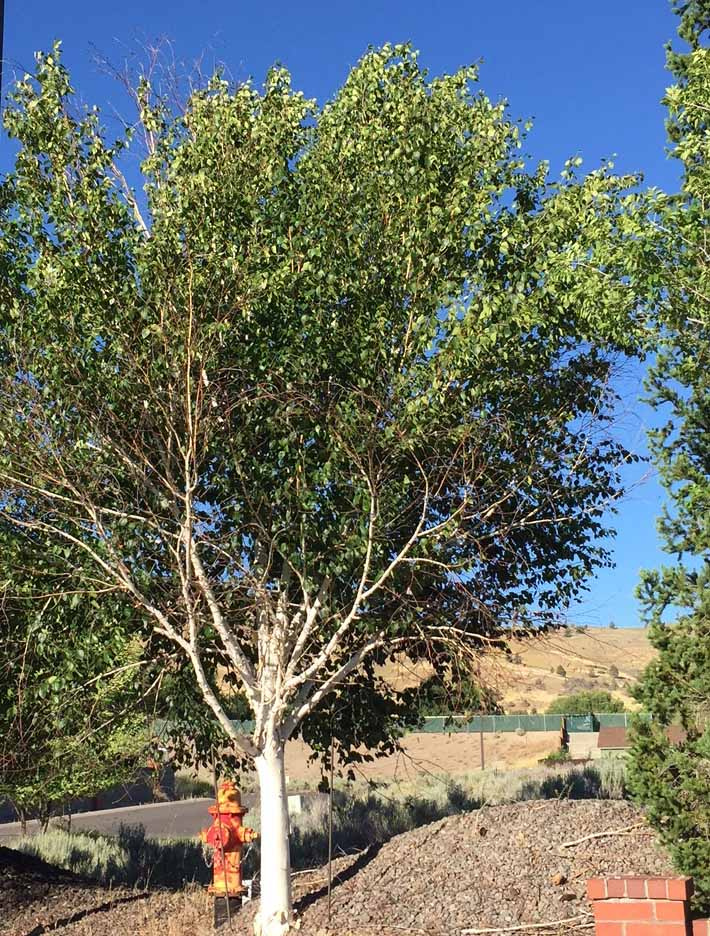 – A voracious insect – the bronze birch borer – is picking off beloved birch trees throughout Oregon.

Common for many years in Eastern Oregon, the hard-to-control beetle first showed up west of the Cascades in 2003 in Portland, where it has killed hundreds of trees. It slowly migrated and is now found in abundance as far south as Klamath Falls, according to Nicole Sanchez, a horticulturist with Oregon State University Extension Service.

Sanchez has co-authored a detailed fact sheet on the problem called Homeowner Guide to Managing Bronze Birch Borer in the Upper Klamath Basin. The information is relevant for the entire state.

The first sign of infestation is flagging branches with sparse, stunted and yellowing leaves at the tree canopy, she said. Twigs will fall and eventually the branches lose their leaves. Ultimately – often before a homeowner notices – the tree will have so much damage it’s impossible to save. Caught in early stages, death can be averted.

“If you don’t know you have an infestation, it’s usually too late,” said Sanchez. “Then you have to take the tree out, which is expensive.”

There’s no easy way to defend against the pest. Besides cultural practices like mulching and watering, which can help fend off the insect if the tree isn’t yet infested or early in the infestation, the only solution for control is chemicals.

“People don’t want to hear that because of the effect pesticides have on beneficial insects and they cost a lot,” she said. “But it’s either that or the tree dies. Either way it’s expensive.”

Sanchez, who has seen trees killed by inappropriate applications of pesticide, cautions homeowners to use them correctly. The pesticides – which are usually used as a drench – should be applied at the tree’s drip line (where the branches reach) – not next to the trunk. If possible, hire a certified arborist.

Birch are wind pollinated, but the catkins may be attractive to bees so insecticides should only be applied after flowering has occurred in spring to reduce possible exposure. Don’t apply systemic insecticides, which are the most commonly used, when flowers that are attractive to bees are blooming nearby. Remember you must follow the instructions on the label. It’s the law.

The adult bronze birch borer looks like a tiny long football and is olive to brown with coppery metallic wings and body. It lays eggs under loose pieces of bark at the top of the tree. After about two weeks, the eggs hatch and the larvae bore into the cambium layer where water and nutrients move around. As it feeds, the frass it produces plugs up pathways. It feeds for two years, during which it does considerable damage, and then emerges. By the time you see the D-shaped holes, damage can be significant.

“Because the insect larvae feed at the top of the tree, damage sometimes is not obvious right away,” Sanchez said.

Stressed trees are a magnet for bronze birch borers, so keep them healthy. Birch like moisture and a cool atmosphere for its shallow roots so watering and mulch are essential. Water regularly and deeply (about 10 inches). Some shade is not a bad idea, either. Birch naturally live at the edge of forests, not in the ground between sidewalk and street.

“Most people don’t think about watering mature trees,” Sanchez said. “In general, all birch are moisture-loving trees. They’re not great in drought, so they need to be watered.”

In Sanchez’ publication you’ll find a chart showing the advance of the damage, ranging from a healthy tree to one that needs to be removed.

“Try to be realistic,” she said. “If 40 percent of the tree or more is affected, it’s probably not cost effective to treat it. We don’t take these decisions lightly. We want to help people realize too late comes a lot sooner than people realize. It’s a tough pill to swallow.”