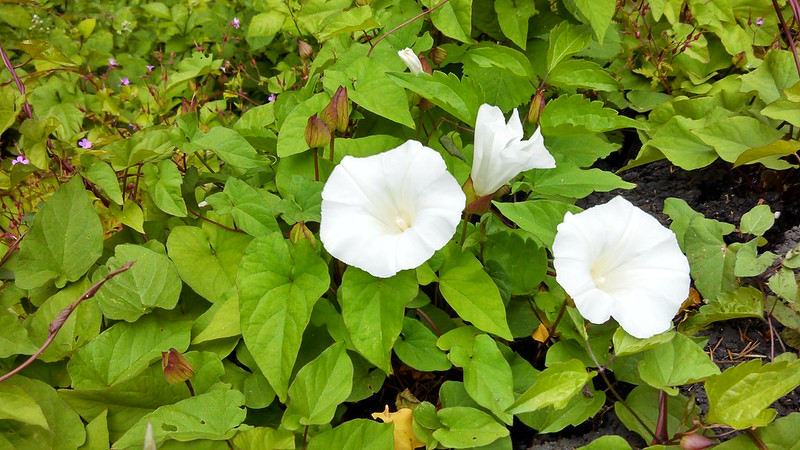 With white trumpet-shaped flowers and thin stems that twine around just about anything, bindweed is one of the most frustrating weeds for home gardeners.

This invasive perennial makes itself at home by sinking roots as much as 9 feet into the soil and can stay as an unwanted guest for up to 20 years. Known as field bindweed (Convolvulus arvensis) or hedge bindweed (Convolvulus sepium), both are in the morning glory family and often confused with wild buckwheat and morning glory, which are summer annual plants that aren’t invasive. Bindweed species are native to Europe and now are distributed worldwide, according to Andy Hulting, an Oregon State University Extension weed specialist.

“Bindweed is considered to be one of the most noxious weeds in the world because of its yield-robbing practices in crops such as wheat, potatoes and legumes (beans and peas),” he said.

Spreading by seed and through a deep, extensive horizontal root system, bindweed seed can persist for many years in typical garden soil. “Although bindweed roots can grow deep, most of the horizontal roots colonize the upper 2 feet of soil,” Hulting said. “They tolerate spoor soils but seldom grow in wet or waterlogged areas.”

Bindweed grows along the ground until it contacts other plants or structures and spreads over anything in its path. Much like pole beans, bindweed’s stems rotate in a circular pattern until they attach to a solid structure. The stems wrap around the object as it grows. Though control is difficult, strategies to curb these botanical trespassers do exist. Mowing isn’t one of them.

If you want to avoid using herbicides to control bindweed, plan to pull out or dig up plants for three to five years, Hulting advised. Persistence and dedication are needed to get rid of bindweed; roots left in the soil after cultivation will regenerate in about two weeks so be prepared to pull plants up every three weeks. Repetitive cultivation throughout the growing season will deplete the root system and provide control.

“Use the deepest cultivation implements available, such as a garden fork,” Hulting said. “Be aware that root fragments as small as 2 inches can generate new shoots. Make sure as much of the root system becomes dried out as possible.”

Glyphosate herbicides (such as Roundup) are an option, as long as you can keep the herbicide spray or drift away from other plants in your yard. These herbicides are absorbed by foliage and move throughout the plant to kill roots and shoots. The best time to control bindweed with glyphosate herbicides is when the plants are flowering.

Repeated applications of herbicide will be necessary to control bindweed. The root system can be so immense that not enough herbicide can be absorbed with a single application. Be aware of warnings and follow the directions on the label. It’s the law, Hulting noted.

“The texture of bindweed’s leaf and stem surfaces forms an effective barrier to absorption and translocation of many herbicides,” Hulting said. “Use repeated applications, but allow the plant to grow and produce flowers before each subsequent application.”

Identifying bindweed can be tricky. Its arrow-shaped leaves grow opposite each other along each stem. When juvenile stems are broken, they exude a milky sap. The flowers are white to pink and trumpet shaped, and produce indeterminately throughout the year.