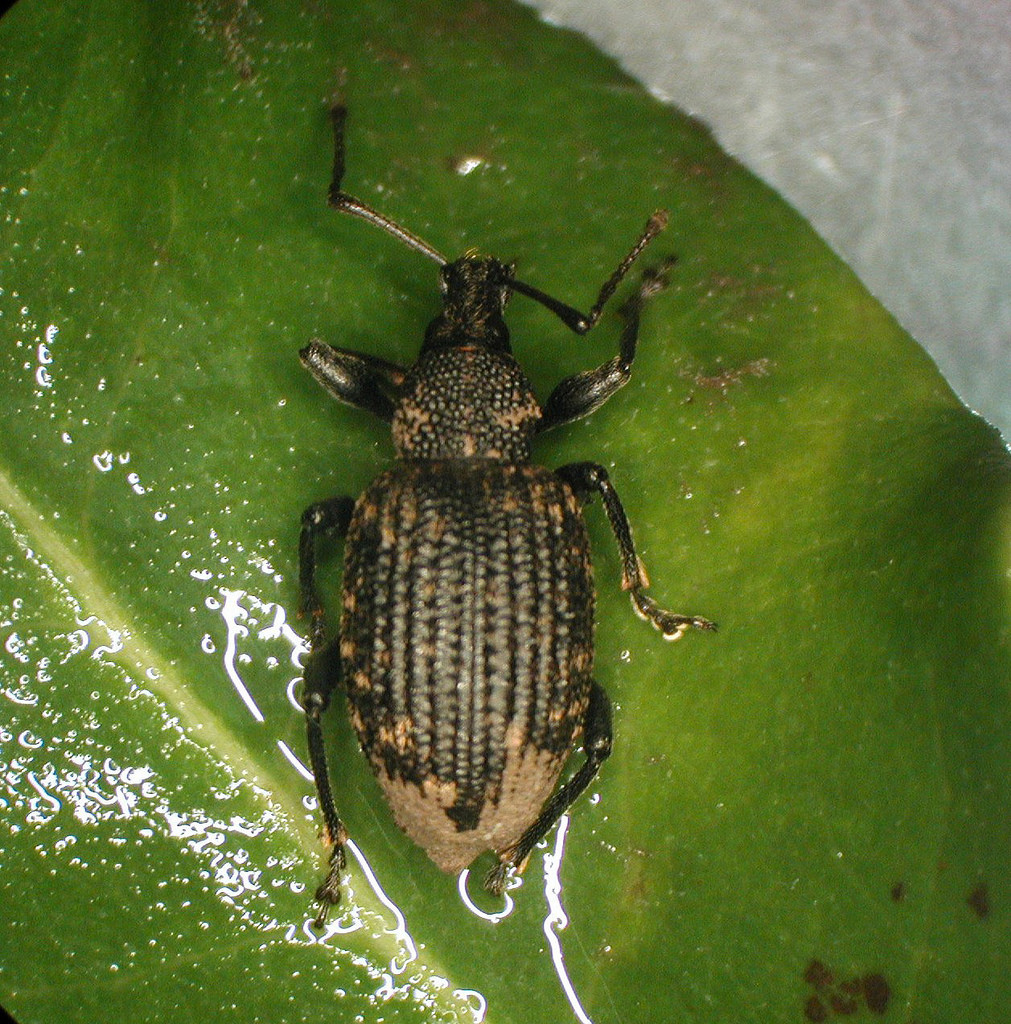 Rhododendrons say spring as loudly as football says fall. Both have fervent fans and enemies staring them down.

The teams that feed on rhododendrons – called black root weevils – are tiny compared to the helmeted players at each end of a football field, but the damage they do aggravates gardeners who can’t figure out a good defense.

Wouldn’t you know it, rhododendrons are a favored target of black vine root weevils.

However, there are several weevil pests, including strawberry root weevils. All are beetles with root-feeding larvae and leaf-eating adults.

Most weevils emerge from the soil from late May through the end of June, according to Robin Rosetta, an entomologist with Oregon State University Extension Service. The C-shaped larvae are legless, white with tan heads and up to a ½-inch long.

During the day, the reddish-brown to black beetles hide themselves under the moist mulch or debris around the base of plants. At night, the hungry adults climb up and start chewing on the leaves of rhododendrons and other woody ornamentals, leaving noticeable notches along the margins.

Though they can’t fly and move slowly, adult root weevils walk easily through a landscape, finding new victims as they go. All adult beetles are females, which lay eggs in clusters in or on the soil from June to September. After hatching, the larvae immediately wriggle through the soil to begin feeding on roots. They spend winter months in the soil and continue to develop in the spring as the soil warms. The larvae pupate and then emerge as adults in late spring and start the cycle again.

One way to check for root weevils is to examine woody plants for fresh notches on leaf edges, evidence of adult feeding damage, especially in tender new leaves. The notching usually begins at the base of the plant and moves upward during the summer, according to Rosetta

“The current year’s damage can be distinguished from previous years by looking at the new growth,” she said. “Last season’s growth often has brown edges along the notching.”

Although the notched leaves adult root weevils create are most visible, it is the root-feeding larvae that do most of the damage, often girdling plants at the base of the trunk, which can lead to death.

Root weevil pests can be controlled in two ways. One is by applying a chemical insecticide, some approved by the Organic Materials Review Institute (OMRI), to the leaves when adults are feeding in late May through June. For more information on chemical control in home gardens reach out to your local OSU Extension Master Gardener help desk at your local county Extension office. For more information on root weevils in general refer to the Pacific Northwest Pest Management Handbook, The Pacific Northwest Nursery IPM and The American Rhododendron Society website.

The least toxic method to control weevils is to treat them in the larval stage, using beneficial nematodes, Rosetta said. There are two optimal timings, one in the late spring to early summer targeting late-stage larvae, pupae, and adult weevils prior to emergence. For spring control, soil temperatures need to around 55 degrees or above. Some springs, like the last one, are too cold for effective control.

A more reliable time is at the end of summer, August through early October, when soil temperatures are warm and the nematodes target young weevil larvae. With continuing warm temperatures and some moisture to keep the soil sufficiently wet, this fall should have optimal conditions for controlling the weevils. Pulling back mulch and leaf debris from around the plants may help the nematodes get to the roots where the larvae are feeding.

“This special strain of nematode, or microscopic worm, attacks only soil insect larvae,” she said. “These nematodes are non-toxic to plants and other animals and are very effective against root weevil larvae.”

The nematodes, which can be purchased at garden centers and via the internet, are added to water, then applied according to package instructions. Timing is of utmost importance – apply when the soil temperature is above 55 degrees and the soil is moist.

“Releasing them on a cloudy day or early in the morning or evening is useful as they are sensitive to ultraviolet (UV) light from the sun,” Rosetta noted.

The nematodes do not usually last through the winter.

“But the good news is that if you do a thorough job of control, you probably won’t have your weevil pests back, at least for a few years,” she said. The one advantage we have with root weevils is that they do not fly as adults. We can clean up an area and then diligently guard our borders for intruders.”