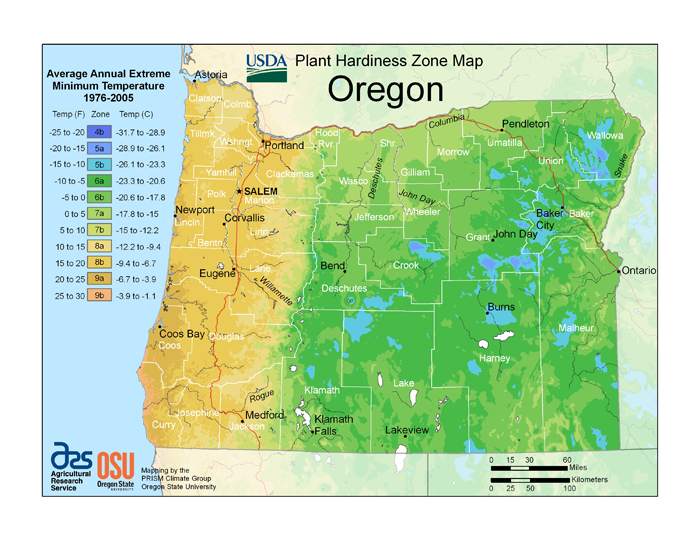 You visit the nursery, pick out a primo plant, come home, put it in the ground and wait for it to become a beautiful tree, shrub or perennial. Then spring arrives and it’s dead or floundering.

In some cases, cold temperatures are the culprit. It’s a matter of right plant, right place, said Nicole Sanchez, Oregon State University Extension horticulturist. Plants survive to a certain low temperature — a characteristic they developed through evolution in their native habitat. To be assured your plants will avoid cold-related death, you need to know about hardiness zones . Plants bought at nurseries should have the hardiness zone somewhere on the label or tag.

The zones are determined by the U.S. Department of Agriculture, working with Oregon State University’s PRISM Climate Group, and based on a 30-year period of averaged minimum low temperatures. The latest hardiness map came out in 2012 and is from data collected during the years 1976–2005. Zones are ranked from 1 (-60 degrees) to 13 (70 degrees), though the extremes are rare. To find yours, key in your ZIP code and your hardiness zone will appear

Oregon’s hardiness zones range from 6a (-20 to -15) to 8b (15 to 20), with pockets of 5b (-15 to -10) in eastern Oregon. The map doesn’t reflect the coldest it has ever been or ever will be at a specific location, but simply the average lowest winter temperature for the location over a specified time.

The problem is that with climate change, the zones are shifting, Sanchez said. For instance, the 2012 map zones changed in many areas by 5 degrees – or a half-zone warmer – than the previous map. Already, there’s talk of the Portland area moving from zone 8b to 9a, which has a low of 20-25 degrees.

“We won’t know the specifics about zones changing until we have another 30 years of data to go on, but that doesn’t mean we wait until 2035,” Sanchez said. “They may use an earlier time period. Then we can look and see if there are long-term changes that would be reflected in new zones for particular areas. So, we wait and see.

“I always hear people say, ‘This is the warmest spring ever’ or ‘I’ve never seen a summer so hot.’ Usually, they’re wrong. Weather is a short-term phenomenon and climate is a long-term pattern.”

The map is a guide, not an absolute document. There can be winters when lows dip below your zone minimum, she said. Nature can throw a curve ball; nothing is guaranteed. For now, gardeners should base their plant choices on the current map.

What happens in your garden could very well be different than your neighbor because of what are called microclimates. A microclimate can have an effect similar to moving to a colder or warmer zone. They can be influenced by structures like the orientation of your house to the sun. South will be warmer than north, west warmer than east. Other microclimates may be related to slope: cold air pools at the bottom and the high points are cold, too, because of wind and exposure. So, the middle of a slope is the sweet spot for borderline hardy plants. Microclimates can be created with rock walls and mulches, buildings and fences, and windbreaks created with plants.

“I’m in zone 6,” Sanchez said. “If I wanted to plant dahlias, which are zone 7 plants, I’d plant them on the south side with a gravel mulch that would store heat.”

Zones are essential when choosing a plant. To be successful, plants must fit into your zone, which helps with selection. If you have five plants you like and only two are in your zone, it narrows down your selection. You can push the envelope with “zonal denial” as some call it; just be prepared to lose plants periodically.

“Some gardeners get a kick out of out of growing something that allegedly won’t grow in their zone,” Sanchez said. “Sometimes a plant will survive for several years because the weather doesn’t get down to the minimum of your zone. But, then a really cold winter comes along and zaps them. Be careful with woody plants like shrubs and trees. They are investments. You can pay $350 for a tree or $15 for a flat of impatiens.”