Native Oxalis oregano thrives in my garden. I love the lushness it provides my woodland garden setting; however, left unchecked, it will creep well beyond its boundaries. Then there’s the nasty oxalis weed—Oxalis stricta—that manages to reproduce every way imaginable: underground rhizomes, growing from any remaining roots, stolons, and spraying seeds every which way at the slightest touch if seed pods are left to ripen. That’s two familiar species out of the approximately 800 in the Oxalis family. 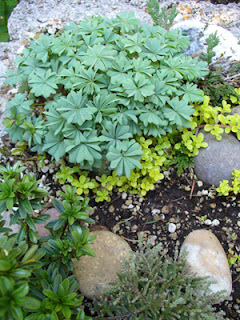 Lucky for us, many Oxalis aren’t weedy and offer charming ornamental value. I fell in love with Oxalis adenophylla, the silver shamrock. I haven’t tried planting it in the ground, but do have it in a trough and another container where it keeps two dwarf conifers and a sedum company. It was perhaps the most asked about plant in the garden designed by Alyse Lansing on the ANLD garden tour.

Alyse also used what looks like the marginally hardy Oxalis Charmed® Wine accompanied by a hosta and delicate pink and green variegated Japanese maple. She effectively repeated the combination in three containers along a narrow path at the side of the house. In Adriana Berry’s garden, also on the ANLD tour, I was introduced to Oxalis magellanica ‘Nelson’ for the first time with its sweet double white flowers and tiny shamrock ground-hugging leaves. Adriana sang its praises. 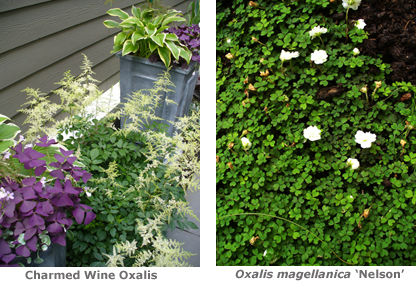 I don’t know how I’ve missed the wide variety of garden-worthy Oxalis available to us. I’ll now be on the lookout for O. oregano ‘Klamath Ruby’ (source: Joy Creek Nursery). Its dark green leaves with burgundy reverses and stems set it apart from the standard species. The three-inch, triangular purple leaves of Oxalis regnellii ‘Triangularis’ make it a stand out (source: Dancing Oaks Nursery). In need of light shade to protect the leaf color, I think it would be lovely growing at the feet of my giant sequoias. Oxalis tetraphylla ‘Iron Cross’ with its dark splotch in the center of the leaf and non-spreading habit would be a good addition to the garden (source: Dancing Oaks Nursery). And then there’s Oxalis palmifrons, also known as Palm-leaf False Shamrock. Swooning after seeing this adorable plant would be understandable (Source: Plant Delights Nursery). 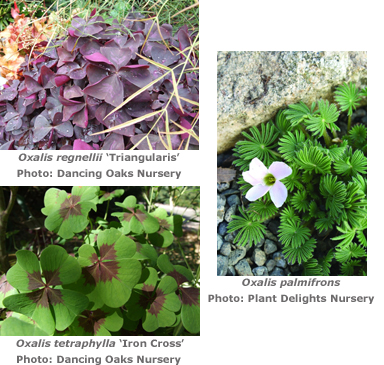 To see more Oxalis with ornamental value, check out Plant Lust and Plant Delights Nursery. What Oxalis species are you growing in your garden?