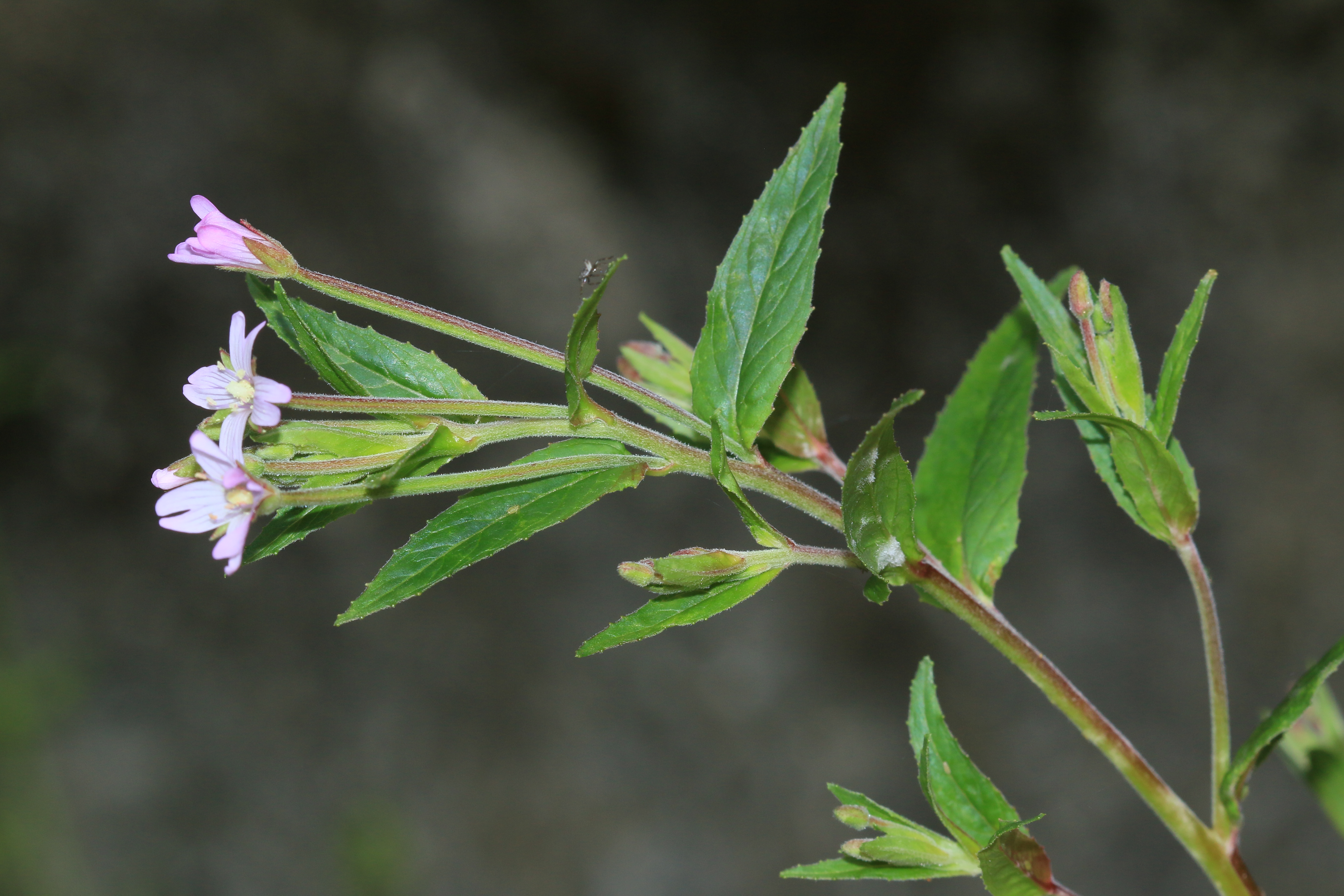 Kym PokornyJuly 10, 2017No Comments on Know your weeds before waging war

Summer has arrived and so have the weeds to take over our gardens and make us tear our hair out in frustration.

Ed Peachey, Oregon State University Extension Service weed specialist, can relate. He sees weeds everywhere and has plenty of advice to share. The first line of defense is identification.

Even those who subscribe to the philosophy of there are no such thing as weeds just plants in the wrong place have to admit that some get out of control. They out-compete desirable plants and quickly take over vegetable gardens, flower beds and lawns.

Perennial weeds such as Canada thistle, dandelion and bindweed are the hardest to control, but many annuals have the ability to disperse their seeds far and wide, whether it’s by wind, wildlife or, as in the case of western bittercress, send their seed flying for many feet.

“Some annual weeds are not that big of a deal,” Peachey said. “Their competition with other plants is fairly minimal. But it makes a difference how many seeds are produced and how long they live in the soil.”

How he kills them is determined by the weed. For annuals, digging them before they go to seed is effective. If, like pigweed and lambsquarters, they have tap roots, it’s good to get them early while the root is still short. Scuffing them with a hoe, pulling by hand or using an herbicide, whether organic or synthetic, can be effective. Mulch helps to rob weeds of sunlight and will help kill them, but seeds will still blow in and germinate. Laying black plastic helps control weeds by preventing light from reaching weed seedlings, but will not be effective on established perennial weeds that will sometimes poke through plastic. Weeds must be removed first and the plastic left for three to six months.

Two popular organic herbicides are Suppress and Avenger, which kill by contact. Remember, though, that just because a product is organic doesn’t mean it’s are safe.

“These herbicides can be very useful to homeowners,” Peachey said. “They give a quick burndown, usually within two to three days. Their main advantage is that they don’t injure perennial plants in the landscape that gardeners want to keep. The downside is that they only kill small annual weeds.”

Many homeowners opt for Roundup, which is effective on many weeds, but also may damage desirable plants it comes in contact with. There are a couple of pre-emergence herbicides such as Preen that can be used in the landscape without much risk to plants.

On the whole, unless a homeowner is dealing with a large garden, Peachey doesn’t recommend herbicides. For those who do decide to use one always follow the instructions and safety precautions on the label.

Of the many weeds out there right now, Peachey identifies these five as some of the most common. Learning to identify them will make controlling them more effective.

Northern willowherb (Epilobium ciliatum) [shown above] is an upright perennial weed with oval- to lance-shaped leaves. Small, light purple or pink ray-shaped flowers have four petals, though they look like eight because they’re so deeply cut. Foliage and stems are covered in bristly hairs. Downy seeds can float for long distances.

Sharppoint fluvellin (Kickxia elatine) forms a ground-hugging mat. Leaves are egg-shaped to heart-shaped and are covered with soft hairs. Tiny flowers, which appear June through September, have two lips; the top is violet, the bottom is yellow. It can be confused with bindweed (wild morning glory), but is much smaller. Like bindweed, it spreads by roots and seeds.

Shiny geranium (Geranium lucidum) resembles stinky herb Robert (G. robertianium), but doesn’t give off a bad odor and has shiny foliage that isn’t as deeply cut as herb Robert. Both have dark pink flowers similar to cultivated geraniums only much smaller. Herb Robert flowers are three to four times the size of shiny geranium. Spreads by seed.

Western bittercress (Cardamine oligosperma) is a tiny weed that forms a rosette. Young leaves are round but as the plant ages new leaves further up the stems are arrow-shaped. The long, upright stems hold white flowers that give way to pods that can release thousands of seeds that “pop” many feet away. 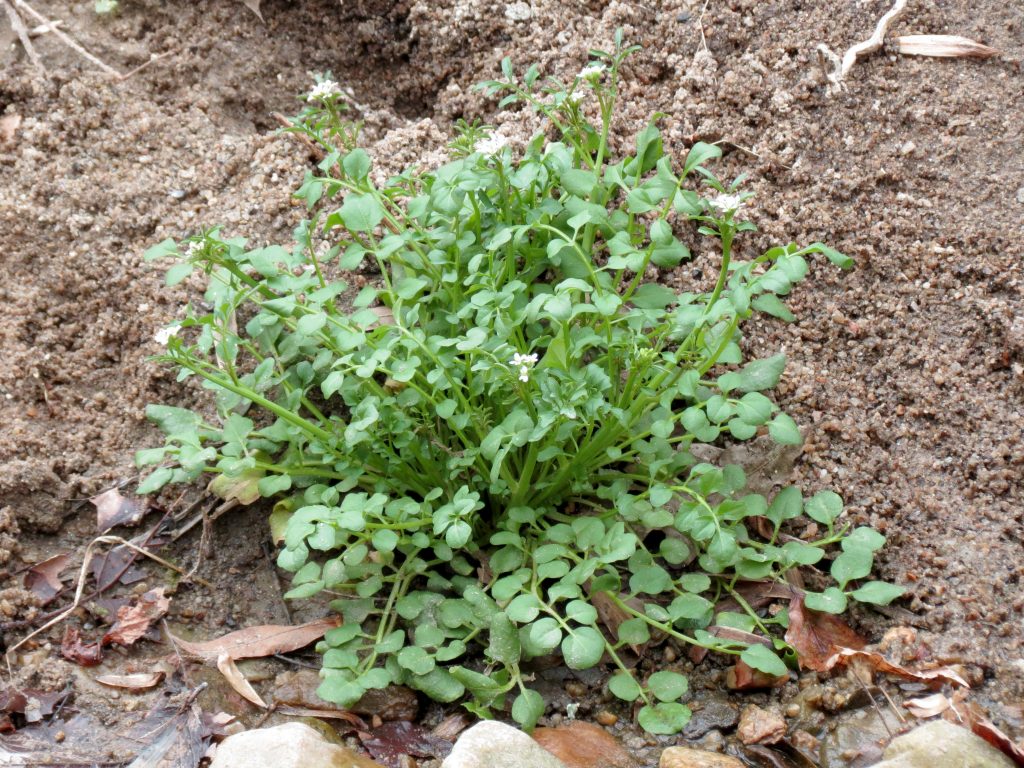 Purple dead-nettle (Lamium purpurem) features slightly hairy, spade-shaped foliage that is tinged purple, especially those leaves closest to the top of stems. Like all members of the mint family, stems are square. Flowers, which appear in spring, are lavender and look like tiny snap dragon blooms. Spreads by seed.