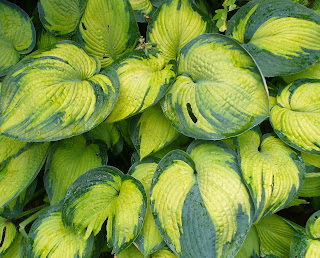 Hostas are a go-to plant for me because they thrive in shadier conditions, offer bold foliage and are a low maintenance plant. This year I added dozens of cultivars to fill in the many spaces I created with the redesign of my garden. Interesting, proven varieties can be found in local garden centers, but I always have fun shopping for hostas, ferns and epimediums at Sebright Gardens in Brooks, Ore. Not only do they have a hoop house filled with hundreds of varieties, they also have a spectacular display garden.

I planted most of my new hostas in shady conditions, but a few got more afternoon summer sun than I anticipated and experienced leaf burn even with adequate water. I was prepared to move them to a less sunny location, but Kirk and Thomas, co-owners of Sebright Gardens, suggested I leave them where they are for at least another year. They anticipate a more established root system will help them hold up to the sunnier location. I’ll defer to the experts and keep them there (and it will be less fall garden work for me!). Besides, according to Sebright Garden’s website, a clump of hosta begins to show its mature characteristics after three years and should be fully mature at five years.

The Hosta genus was named after Nicholas Thomas Host, an Austrian botanist. Hostas are native to Japan, Korea, and China. They were first imported and grown in Europe in the late 1700s and by the mid-1800s, were growing in the United States.

Leaf size can vary from 1-18 inches. I have some of the miniatures with leaves about two inches long; the largest leaf in my garden this year was Sum and Substance, which measured about 12 inches. I am anticipating that in a few years, Empress Wu and Gentle Giant (a Sebright introduction) will become the leaf size champions as the plants mature. 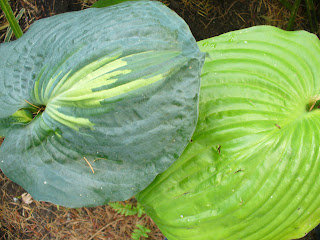 With all the natural leaf color and form mutations, there are more than 3,000 registered and named varieties of hosta. The most fragrant hosta bloom in my garden is produced by Guacamole. A heavenly scent sweetens its large lily-like white blooms.

I haven’t tried cooking with them nor adding their blooms to my salads, however they are edible by humans and are pet safe. It is well documented that hostas are also enjoyed by deer, slugs and snails, though the thicker leaved varieties thwart the latter two. Japanese serve hosta (Giboshi) with meals, as you would with Spinach, by boiling the shoots. I wonder if the various varieties have different flavors?

Here are some that did well in my garden this year (note the holes in the leaves were caused when I had compost blown-in in mid-May). Please share some of your favorite hostas with us. 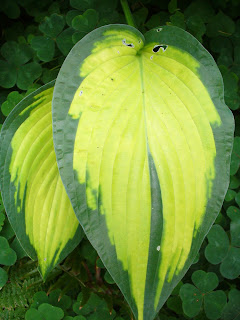 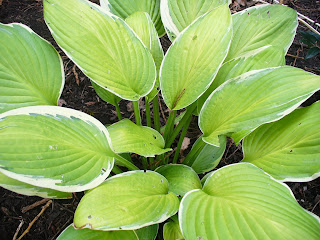 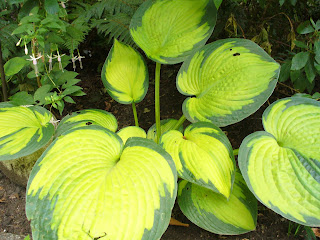