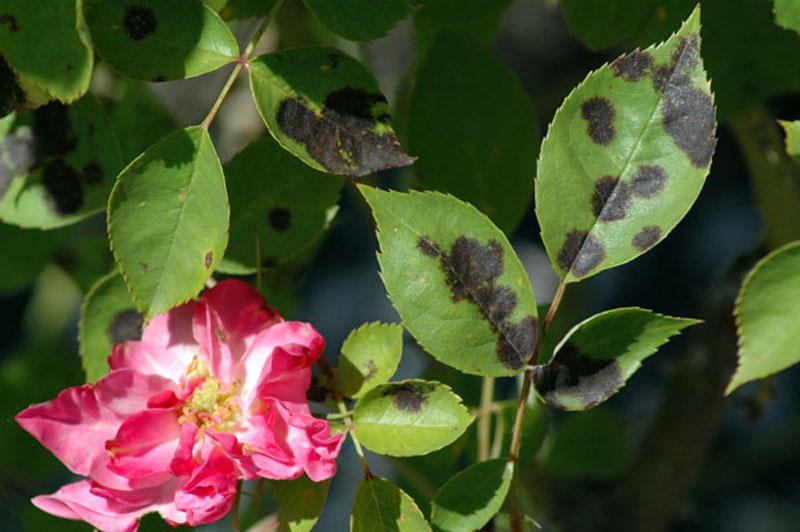 Charmingly mild weather this winter will most likely coax roses into bloom early, which means dealing with the usual diseases and pests earlier, too.

When it comes to one of the country’s most popular perennial plants, the “big four” vexations are powdery mildew, black spot, rust and aphids, according to Jay W. Pscheidt, a plant pathology specialist with Oregon State University Extension Service. More recently, downy mildew, which looks strikingly similar to black spot, has become an increasing problem.

“People are confusing them,” he said. “It’s difficult to tell the two apart.”

Black spot shows up as ragged black spots on leaves that often turn yellow and eventually drop off the shrub. The black spots made by downy mildew spores are not as dark and can have an angular appearance. Under moist conditions, you might see a gray, downy-looking growth on the undersides of the leaves.

As the name suggests, powdery mildew shows up as a white powder covering the leaves, but without the black blotches typical of downy mildew and black spot, Pscheidt said. It usually hits roses during the transition into summer’s driest time, particularly when dry days are followed by nights with high humidity.

Rust, which begins in spring and peaks in early summer, appears as orange pustules that can blanket the foliage in worst-case scenarios.

Because of the relatively warm winter, black spot may be the biggest issue this year, Pscheidt said. Rose plants held onto some of their leaves so there are plenty of disease spores that overwintered and are ready to attack newly emerging shoots.

Insects are less of an issue with roses. Aphids are about all gardeners have to worry about in Oregon and are fairly easy to control, according to Gail Langellotto, Master Gardener coordinator for OSU Extension. Her first line of defense would be to squish some with her fingers to release a chemical signal that attracts natural enemies like lacewings, ladybird beetles and parasitoid wasps. Follow that with a strong spray of water from the hose to wash the remaining aphids to the ground.

“Aphids are poor climbers,” she said, “and are less likely to reestablish because they run a high risk of getting eaten by ground-roving predators, such as spiders and beetles.”

Since aphid numbers can explode on nitrogen-rich plants, it’s a good idea to use an organic fertilizer, or a slow-release synthetic fertilizer that will give them less readily available nitrogen.

As for diseases, the best strategy is to start with disease-resistant cultivars.

“Buy fisherman roses,” Pscheidt said. “The types that you can plant and then go fishing. Breeders are always coming up with new plants that resist pests. Local retail nurseries will generally have a good list for you.”

But just because a rose is an older variety doesn’t mean they don’t fight off disease. OSU Extension’s Pacific Northwest Plant Disease Control Handbook offers a list of classics that fight the good fight against black spot, rust and powdery mildew. Longtime favorite hybrid teas ‘Just Joey,’ ‘Chicago Peace’ and ‘Mr. Lincoln’ are on the roster. ‘Gold Medal’ and ‘Queen Elizabeth’ grandifloras made the cut, as did the well-known floribunda roses ‘Playboy,’ ‘Sexy Rexy’ and ‘Iceberg.’

In addition to careful selection, prevention is the next best strategy and Pscheidt has some recommendations:

For more information, refer to the OSU Extension publication Controlling Diseases and Aphids on Your Roses or get help from a Master Gardener in your area.