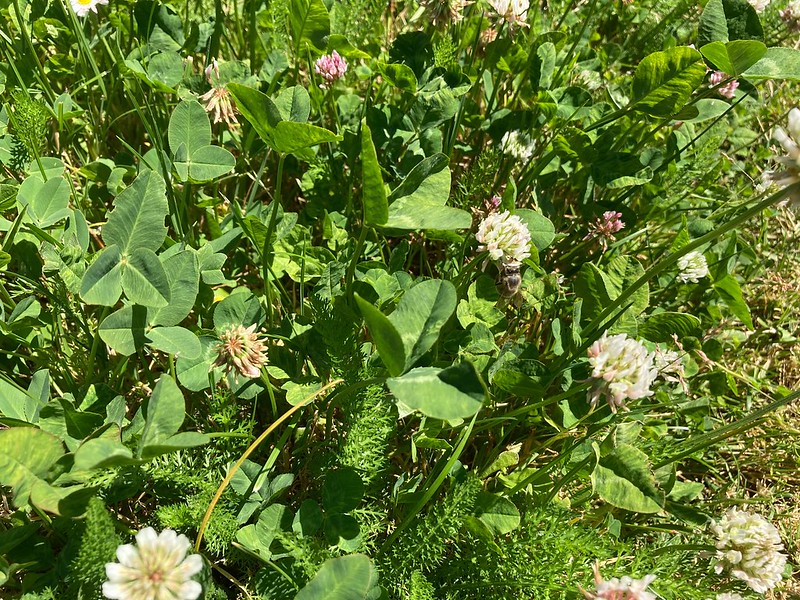 To support pollinators, people have turned to creating eco-friendly spaces around their homes, including replacing their grass lawns with flowering plants.

That’s no easy task, according to Carolyn Breece, Oregon State University Extension Service faculty research assistant in the OSU Honey Bee Lab. Since 2016, Breece has researched the best flowering lawn substitute. It turns out transitioning from an all-grass lawn to a flowering lawn is challenging.

“The whole idea was to plant a flowering lawn that provided pollen or nectar,” Breece said. “You see English daisies in lawns and they’re really cute, but they don’t provide much for the bees. We tried to find flowering plants that would bloom at short height so they can be mowed and have the look of the great American lawn but still have resources for pollinators. It hard to find plants that flower that short that would also fit into a lawn.”

In the end, the biggest hurdle, was getting the plants to grow in the presence of grass, which is extremely competitive.

“The two primary plants most successful in combination with turf grass are clover and common yarrow,” said Alec Kowalewski, Oregon State University Extension Service turf specialist. “Both do very well. Yarrow is very drought-tolerant and clover is a nitrogen-fixer, which means it provides nitrogen to the other plants eliminating the need for fertilizer.”

Yarrow looks beautiful in a lawn, Breece added, but doesn’t flower well at short heights. Clover, though, is a workhorse, so much so that it tends to shade out other plants. Eventually, a lawn could end up a simple mixture of clover and perennial ryegrass, which allows the look of a traditional lawn with the benefit of clover providing food for pollinators and nitrogen for the other plants.

But even clover tends to die out if it doesn’t get minimal irrigation. A lawn — whether a traditional mat of green or one to make pollinators happy — takes maintenance, Kowalewski said.

“People ask me all the time how to have a perfect, emerald green lawn without any maintenance,” Kowalewski said. “It’s not going to happen. Even pollinator and eco-lawns need to be watered, mowed and fertilized, just not as much as traditional turf.”

Tom Cook, retired turf specialist for OSU Extension, developed the Fleur de lawn mixture in the mid-1980s when he was looking for alternatives to traditional turf. His work concentrated on maintenance rather than pollinators but many of the parameters were the same. Cook also showed that clover is the most resilient of grass substitutes.

“My goal was to find a mowable ground cover that looked somewhat like grass lawns but required less input than regular lawns,” he wrote. “Specifically, I wanted a lawn that required mowing, less irrigation, less fertilizer, and was competitive with common weeds that invade under-fertilized, drought-stressed grass lawns.”

Cook came up with a mixture of perennial and Kentucky ryegrass, yarrow, clovers and English daisy that is sold today as Fleur de lawn. Once installed, owners either love it or hate it, he said. Usually those who hate it are those who don’t maintain it.

“Most landscape contractors I have talked to like them,” he wrote. “As one fellow told me, he makes money installing them and a couple of years later makes money replacing them with conventional grass lawns. The point is that low-input lawns are not intended to replace grass lawns. They are intended to provide an alternative for people who don’t want or can’t maintain a conventional lawn.”