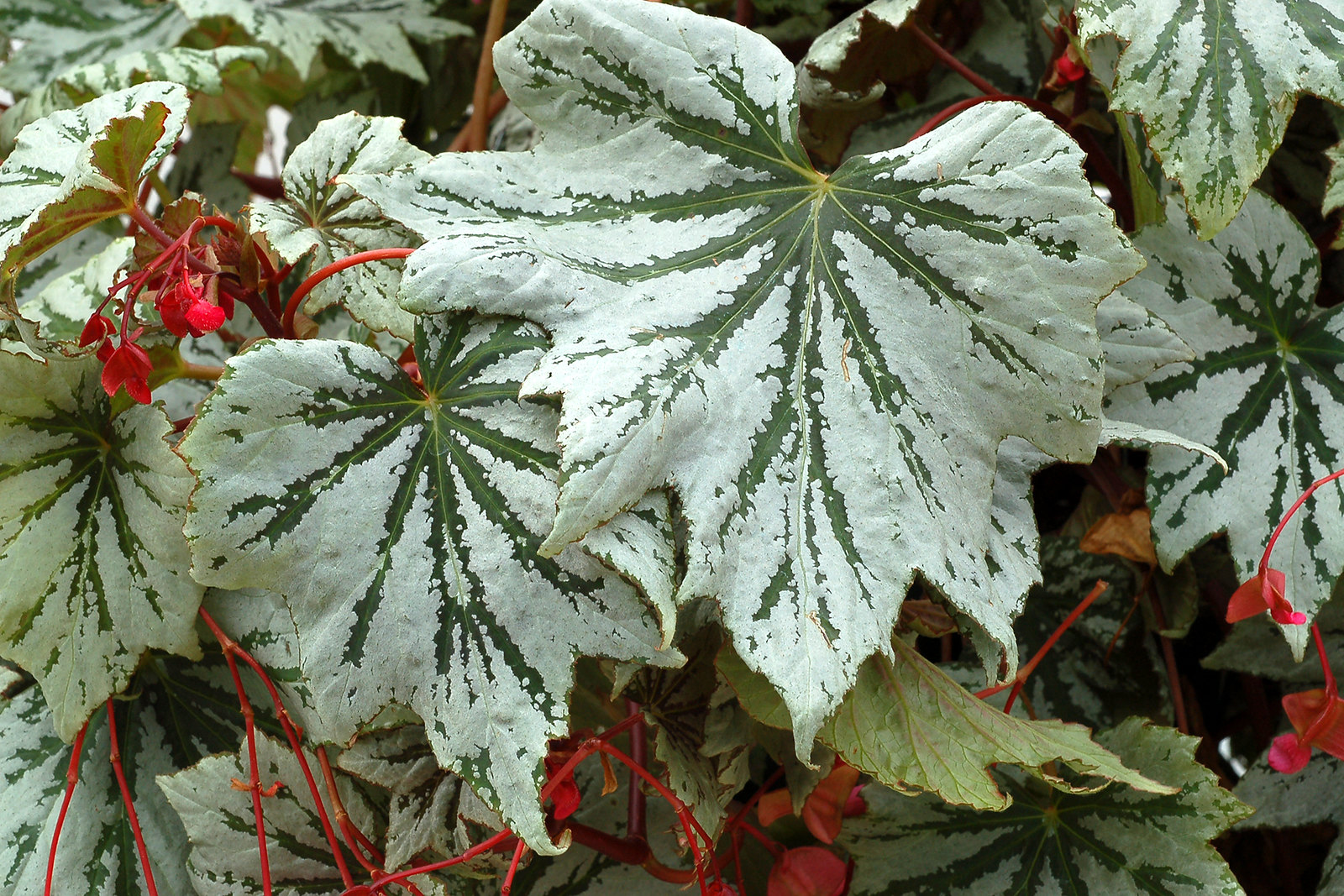 Thanks to zealous breeding and new hybridizing techniques, begonias are booming right along with the renaissance of houseplants.

Nicole Sanchez, horticulturist for Oregon State University Extension Service, knows first-hand how rewarding begonias can be for both beginners and experts. She became a convert as a teenager when she worked at a garden center. Now, her five plants reside in an east window and thrive with little input. Watering properly – not too much – and light fertilizer are all it takes to grow beautiful begonias of every kind.

Sanchez is particularly fond of the spiraled leaves of the five-plant Nautilus series from Terra Nova Nurseries in Canby, Ore. Particular favorites are ‘Ruby’ with spectacular large, ruby red foliage and ‘Lilac’ with violet-rose and ruby purple leaves outlined with a glossy black margin.

“Cocoa ‘Enchanted Sunrise’ is an example of new colors from breeding,” Sanchez said. “It has dark, dark leaves with a salmon bloom. And there are even interesting yellow-blooming varieties like Daystar ‘Primrose.'”

Sanchez credits begonia’s popularity to its exotic, tropical look and colorful, long-lasting blooms that can be brought into the home.

According to the American Begonia Society, there are 1,800 species of begonias and hundreds of cultivars. Native to tropical and sub-tropical regions in South and Central America as well as islands in the Caribbean, begonias were named after Michel Begon, a French politician and ardent plant collector. French botanist Charles Plumier discovered a begonia in Antilles in 1690 and named it after Begon.

“That shows you they’ve been interesting to people for at least 300 years as a collectible plant,” Sanchez said. “The current begonia frenzy started heating up in the early 2000s. In 2011, ‘Escargot’ was the first one to come on the market and it illustrated a new era in begonias. It’s the first one everyone got excited about with its dramatic crinkly swirling, spiral leaves that give it a lot of dimension. And it has green and silver and burgundy to its leaves. Fantastic.”

Parent to many of the new hybrids is Begonia masoniana ‘Iron Cross,’, a star in Sanchez’ eyes even if it is old-fashioned because of its super-textured, dark green leaves with a dark patch in the middle similar to a cross.

Sanchez pointed to the 1970s, another era of houseplant enthusiasm, as a brief fling with begonias. The begonias then had average foliage but the long-blooming flowers – like orchids and African violets – took them to another level. The foliage of many new varieties is all it takes to fall in love. The beautiful flowers are a bonus.

Begonias prefer temperatures in the high 50s into the 70s, which is compatible with most homes. They take moisture from the air so you may want to consider a humidifier, or place the plant near the shower.

Begonias are easy to overwater. Check the soil for moisture by sticking your finger in up to the first knuckle or picking up the pot. If it’s light, it’s time to water. After flowering, cut back on watering, lightly fertilize and let the plant rest for a while. Don’t let a begonia sit in water. Either drain the saucer after watering or put the pot in a saucer lined with pebbles.

Begonias like bright light, but indirect rather than hot sunlight. Sanchez has hers in a room with windows facing east. She suggests experimenting with light by moving the plant from place to place. If the plants begin to stretch, they need more light. If they are stunted and/or burning, they need to be farther from the window or moved to a window with less hot light. A good share of begonias will grow in a south window and most will grow in either an eastern or western exposure.

Begonias thrive outside in the shade when temperatures are above 55 degrees F.

Begonias should be fed with a fertilizer with a higher middle number on the label, which tells you the percentage of nitrogen, phosphorus and potassium the fertilizer contains. African violet fertilizer is a good choice. Dilute it to half strength before using.

Begonias have few problems if watered correctly. When overwatered, roots will rot and the plant will die. Sometimes, aphids will find a begonia, but they aren’t hard to eradicate.