Skip to content
Mike DarcyMarch 19, 2020No Comments on Up, down and all around 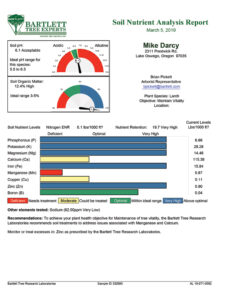 Sometimes popular phrases never really disappear. They go dormant, but eventually come back again. We might call them “recycled,” but I prefer “dormant” — this is a gardening column.

The phrase “up, down and all around” was commonly used in garden training sessions in the 1970s and 1980s, and of course it refers to the three numbers on every box or bag of fertilizer.

I thought this phrase had gone dormant until several months ago when I saw it mentioned in the Salem Hardy Plant Society newsletter. That made me think about whether it is as relevant today as it was 30–40 years ago.
While gardening practices have not changed as rapidly as other technologies — we now have computers, cell phones, instant messaging, and voice commands — technology has impacted the way we garden. University scientists are constantly researching the way plants grow, and their findings frequently impact many of our gardening practices.

Change is constant. Think for a moment about the fertilizer we use and how and when we apply it, the compost we add to our garden, or the soil mixes we use in our containers. Think of the sprays we use, or perhaps don’t use. Think of the diversity of the plants that we grow.

Think of how all of these have evolved during the past few decades.

I have been a lifelong gardener, and I am always searching for new information to improve my garden. Not only do I read new research publications, especially those from reputable local sources, but I also visit with other gardeners to learn what practices they are using. Some of those might be applicable to my garden as well.

I would be remiss not to mention that many of my longtime gardening practices might be based on myths. They still are in my gardening playbook, because that is how I learned to garden.

At a recent meeting of the Portland Rose Society, the guest speaker was a representative of the society’s custom fertilizer manufacturer. They use a formula of 15-10-10.

He discussed the ingredients that make up a fertilizer and their plant-related functionality, and he explained why the NPK numbers are specific for different plants.

For the past several years, I have been reading reports and conversing with other local gardeners regarding the need for adding phosphate to our gardens. My understanding is that area soils already contain sufficient phosphorus — we don’t need to supplement what’s already there.

I asked the speaker what he thought, and he replied that the issue is controversial. There is no clear answer.
An accurate response is very dependent on the local area in which you are gardening. I pondered his reply and realized that the controversy may be more related to the effect of the phosphorus on our environment than it is to any specific plant.

Several years ago, in a conversation with Harry Landers — who at that time was the curator of the Washington Park International Rose Test Gardens, in Portland, Oregon — I commented on how beautiful the garden looked. I asked him what kind of fertilizer he was using. His response surprised me. He said they had been using a fertilizer with nitrogen only for the past several years.

I immediately thought, how could the roses have such beautiful flowers if the fertilizer only had nitrogen in it? Harry explained that every two years, he had the soil sampled from several different areas of the park and tested. Each test indicated that the phosphorus level was extremely high. Thus, he decided to eliminate the phosphate in the fertilizer that they use.

Looking around the garden on that beautiful June day, it was hard to dispute his decision.

The proof is in the soil test
The issue of adding a fertilizer containing phosphorus continued to weigh on my mind. The information that Harry had given me seemed to be the opposite of everything that I had learned.

When I discussed this issue with others, one of the constant responses was, “Have you had your soil tested?” My answer was no, I had not.

So, last spring, I spoke with Brian Pickett, who is an arborist representative for Bartlett Tree Experts in Clackamas, Oregon. He convinced me to have my garden soil tested.

For the past several years, I have been using fertilizer products with no phosphorus — either blood meal (13-0-0) or feather meal (12-0-0) — so I was certain that the phosphorus level in my soil would be low. As Brian took two soil samples from my garden, I was surprised at how deep he went to get the soil for the test. He said that a soil sample from the top few inches would not provide an accurate reading for our purposes, since the shrubs and trees have roots that are growing well below this top layer.

As he left, I thought that he would be surprised at my soil analysis. I didn’t believe my soil would have a high phosphorus content.

Several weeks later, Brian and I went over the results. My phosphorus level was a shock to me. It was very high — almost off the chart. We discussed this and Brian said that he has done many soil tests for homeowners and he has never had a phosphorus deficiency from soils our area.

Then last summer, I attended a study weekend sponsored by The Hardy Plant Society of Oregon. One of the guest speakers was Linda Chalker-Scott, Ph.D., Extension horticulturist and associate professor, based at the Puyallup Research and Extension Center of Washington State University. I have also heard Linda speak at the Northwest Flower and Garden Show in Seattle.

Linda confirmed what I had been hearing about phosphate levels in our soils. She said that soil used for agricultural crops can often be deficient in phosphorus but in landscaped urban soil, such as home gardens, phosphorus in our area is rarely deficient. Her words echoed that of Brian Pickett.

With this new information, I am rethinking the fertilizer that I use in my garden. I continue to search for information on this topic because the research is ongoing. The phosphorus topic continues to intrigue me. It makes me wonder how many garden myths, are simply just that: myths.