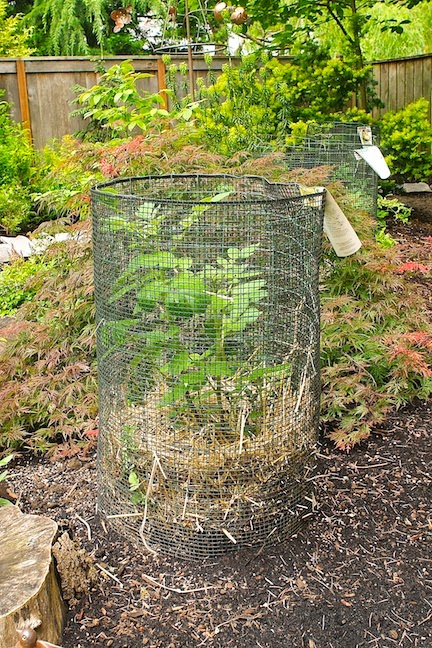 I have grown potatoes in potato towers for the past two years with moderate success. I planted one layer and then tried to keep up with the fast-growing stalks and leaves by adding alternating layers of straw and a potting soil/compost mixture. New potatoes grew along the elongating stalks. At the end of the season, the towers get tipped over to reveal the new potatoes. All in all, easier than digging down into the soil to retrieve the new produce. Inevitably, the stalks and leaves grew faster than I was able to keep up.

Always on the lookout for shortcuts, I came across a potato tower blog that suggests the routine can be simplified…and the yield improved. Rather than trying to stay ahead of the fast-growing greenery, the author suggests planting multiple layers under compost all in one go, then letting the stalks grow naturally out the sides and top of the tower. When the stalks and leaves turn brown, it is time to harvest by tipping the tower on its side and reaping your rewards.

Shall we give it a try?