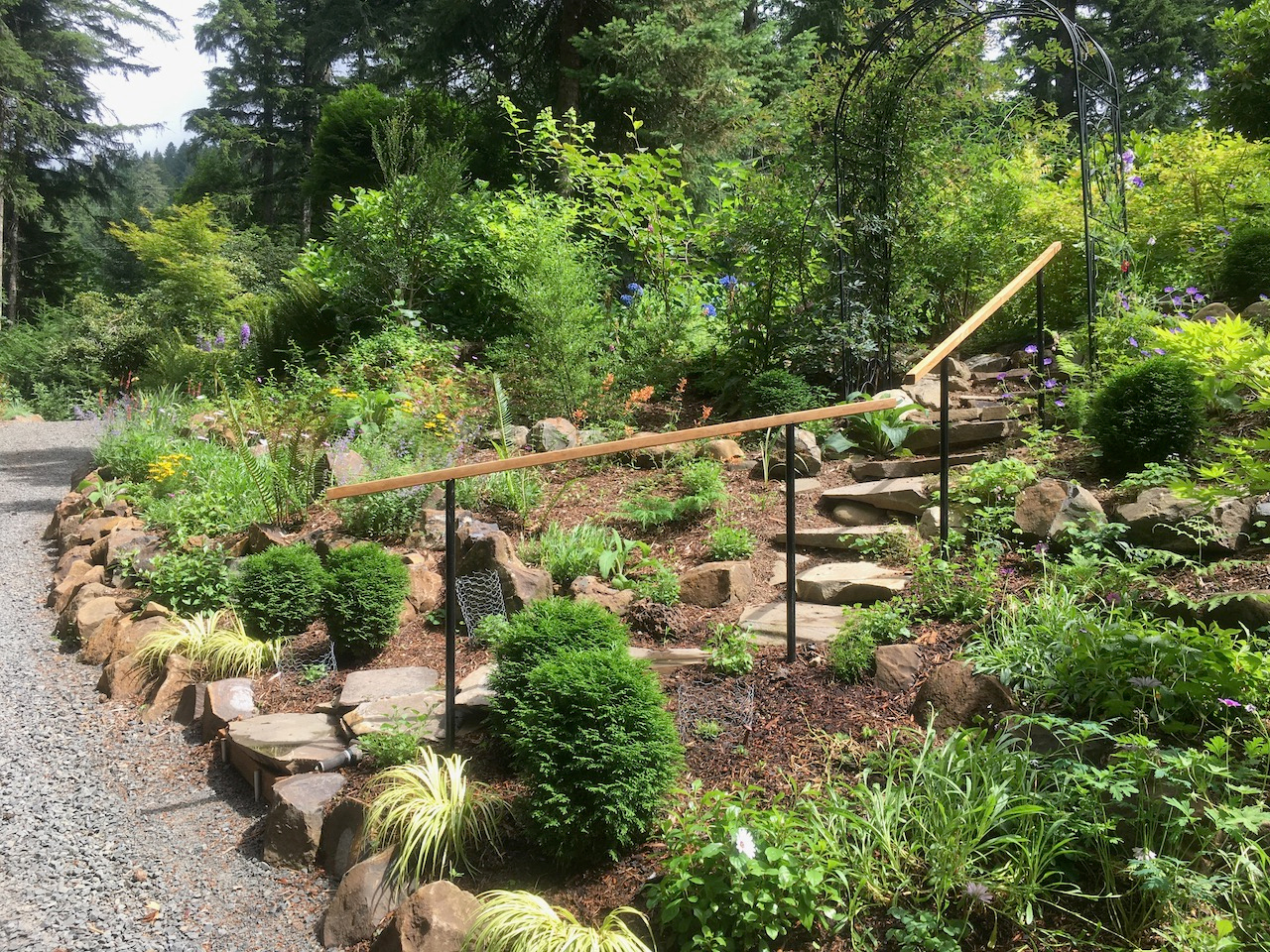 Mike DarcyNovember 20, 2020No Comments on A gardener’s optimism has no limits

Resilient is a good word to describe Diana and Colby Lamb. Resilience is defined as spirit, hardiness, toughness, strength, buoyancy, and resistance.

On September 8 at 12:15 a.m., there was a banging on the door of their Gates, Oregon house. It was a Marion County sheriff’s deputy telling them that there had been a recent change in the wind of the Beachie Creek wildfire that was raging not too far away. They needed to leave immediately for their safety.

On the previous night, September 7, the winds were 50–75 miles per hour and the fire was growing at a rate of about 2.77 acres per second. With the shifting winds, it looked as though the path of the fire was heading directly toward the Lamb property.

Diana said that upon hearing these words from the deputy, it was very difficult to decide what to take in such a short amount of time. Luckily, they had a trailer, which Colby hooked up.

They quickly grabbed their meds, phones, computers and laptops, but very few personal things. No freezers full of meat, no fish from their pond, no pantry stuff, no food, no coats, no art objects and no records or handmade turntables from Colby’s shop.

Diana laughed when she told me that just as they were leaving, she noticed two large ripe tomatoes on the windowsill and took them for bacon and tomato sandwiches! It is amazing how the mind sometimes works.

The road to Gates

In 1996, Diana and Colby began their Northwest Portland garden. It soon became a showplace and was on many garden tours, including The Hardy Plant Society of Oregon Study Weekend, Garden Conservancy, Metro Garden Tour, Rogerson Clematis Garden Inviting Vines Garden Tour and many other open garden events.

Twenty years later, they sold the house and garden. The idea was to downsize the garden for Diana, move from Portland to a smaller community, have land for a garden but also a shop so Colby could continue his metal and wood-working hobby.

The move to Gates gave the Lambs a fresh start. Their new property was outside of the town and had gardening potential, which was exciting for Diana. It had a fairly clean slate from which to start a new garden. Another bonus was that there was a well for their water source, both for drinking and for the plants.

This new space was quite different when compared to their Portland garden, because now there were large Douglas fir trees surrounding the property and plants would have to be selected that would tolerate shade.

The new home also had a shop where Colby, a machinist, could continue with his metal and woodwork. Colby is a professional craftsman. His metalwork sometimes consisted of making sundials, one of which is in the Rogerson Clematis Garden, as well as one in my own garden.

A journey of recovery

The wildfire turned their lives upside down and changed everything. Their house and shop were a total loss.

Currently, they have no power and there is no way to run the well. The property is not a safe place because of hazardous materials, and they are waiting for FEMA (Federal Emergency Management Agency) to assist in the waste removal and deem the property safe.

Both Diana and Colby stressed how very supportive the community has been — both the Portland gardening community and that of Gates and the surrounding area.

Many fir trees are still standing throughout the destruction zone, but they are not safe and will need to be removed. Tree workers in the area are offering to work pro bono to help with this task.

Portland gardening friends have offered Diana some plants. Although physically visiting the area is very depressing, she sees hope in a new garden. Diana explains that it has been very odd the way the fire has affected plants. It sometimes appears as there was no logic to the way it ravaged the area.

A rhododendron in one area is burned to the ground, and in another area a large rhododendron seems unscathed. Roses have survived and new buds are swelling. There is great joy in some of the very simple things that happen in the garden. Seeing a green shoot appear from the base of a hydrangea can bring a tear to one’s eye.

Their new property had a very large working metal waterwheel, 25 feet in diameter, which had become a local landmark. It was located next to a creek and was turned by a gravity-fed pipe above the waterwheel.

Colby painstakingly restored it, painted it barn red, and even decorated it with lights for Christmas. It was visible from the road and a favorite photo opportunity for many local photographers.

Miraculously, the waterwheel survived the fire. The only damage was a dent in an area where a large fir tree fell on it.

I commend the spirit of both Diana and Colby, because the road ahead is not going to be easy. I’m sure there will be many difficult times. However, when I hear Diana talk about her new garden, which will have roses, hydrangeas, hellebores, epimediums, rhododendrons and more, I see her mind is full of ideas regarding the creation of this new space. It will fulfill her goal of having a “garden for all seasons.”

In the spirit of being not only resilient but optimistic, Diana has an order of lily bulbs due to arrive in the spring.

For me, the essence of this story is to validate once again that a gardener’s optimism has no limits. Considering this challenging year and everything that has changed, it is nice to know that gardens are still a source of comfort to many of us.

Gardens continue to demonstrate to us that some things will go on and we can eagerly anticipate those occurrences. In fact, gardens may be the most optimistic things in our world and as such, they need to be nurtured and enjoyed. Joyful experiences definitely incite optimism.